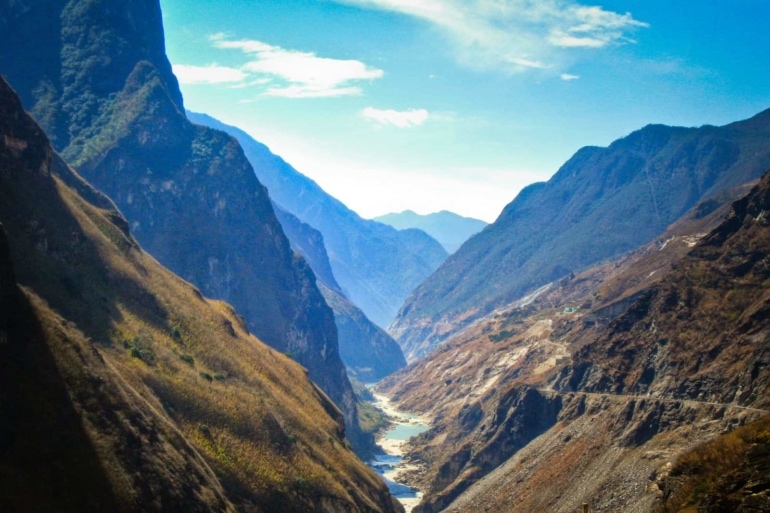 The magnificent Tiger Leaping Gorge (Hutiao Xia)lies in the southwestern Chinese province of Yunnan on the Jinsha River. Yunnan is diverse, the southern region being more tropical and akin to the climate of Southeast Asia (it borders Burma/Myanmar). Northern Yunnan, where the gorge is located, is renowned for its mountainous countryside that more closely resembles the landscapes of Tibet.

Here, about 60km (37mi) north of the famous city of Lijiang, lies Tiger Leaping Gorge, the deepest river canyon in the world (though, by some metrics, it’s only one of the deepest in the world). It rests gracefully in between the glorious Jade Dragon Snow Mountain and the Haba Snow Mountain.

During my ten-day tenure backpacking around Yunnan, I spent two days hiking through this stunning scene. I knew that this trek would be a major highlight of my trip, but I could not have prepared myself for the views that awaited me.

The trail varies greatly, and it ends very differently than it begins. The first view is of the villages and terraces that lie directly beside the gorge. From the same vantage point, I turned my head, only to be assaulted by the view of these mountains, which I had traveled all this way to see.

Yunnan is the most ethnically diverse province in China, as more than 80% of its population is made up of minorities. Tiger Leaping Gorge, specifically, is most commonly inhabited by the Naxi people (pronounced NAH-shee), who live in small villages and hamlets. Various wildlife inhabit the gorge as well. The locals use donkeys to traverse the terrain, and many will offer to carry your bags (or your body!) through the tougher bits of the hike. But, there is a price, of course! There is always a price…

As I covered more and more ground and delved deeper into the uninhabited wilderness, the terrain became more difficult and more wild, and mountain goats began to make regular appearances. The most difficult part of the trail is known as “28 Bends,” aptly named for its arduous hatchback trail of 28 bends, that takes a about 3 hours to complete. In fact, it’s some of the most challenging hiking I’ve ever encountered.

Tiger Leaping Gorge is relatively safe when the right precautions are taken. This hike has claimed many lives over the years due to recklessness and poor planning. Only hike during the day, avoid rainy weather and don some sturdy footwear. You’ll need it.

As I hiked, with my head on a swivel, I attempted to take in my surroundings. There was so much to see and so much to consider. I felt placated and composed. I was satisfied. This is what I had come to China to see. This is why I was here.

Standing inside the deepest gorge in the world, in some remote area of the world on the opposite side of the earth, accompanied by almost complete strangers, I felt plugged into the world and at sync with everything in it. I was ecstatic, feeling an immense sense of luck and privilege to be standing where I was. But I was also saddened, knowing that most of my friends and family would never experience the brilliance of a Chinese mountainside. You simply can’t grasp the magnificence of this place without experiencing it.

On the second day of the trek, hiking further along the gorge, we came upon a Tibetan temple built into the mountainside. Hundreds of prayer flags hung between walls and rafters, blowing dramatically in the high winds. I pictured the local Naxi people coming to this temple for solitude and silence.

After all, peace and composure is what I found deep between these mountains.

Though not an intuitive moniker, Tiger Leaping Gorge received its name from an old Chinese legend which stated that a tiger, running from a hunter, leaped across the gorge to escape. The tiger jumped the gorge at its narrowest point, seen here, which is 25 meters (82 feet) from edge to edge. It must have been a pretty big tiger!

My trek through Tiger Leaping Gorge reinforced my love for travel. Sometimes I feel jaded because I have already seen so much, and despite living in China for a number of months, it feels like it’s been some time since I’ve experienced something truly remarkable. Trekking through the mountains of southwestern China, though, reminded me of the thrill of traveling to a new place, and what this life is all about.

Getting There: There are multiple buses every day to the start of the trail from Lijiang, though they are often run privately by tourism cafes or hostels. Ask the hostel you’re staying at about a ride to the start of the trail. If you’re returning to Lijiang after your hike, you can leave your bag at Jane’s Guesthouse (start of the trail in Qiaotou) for a small fee (5RMB) and pick it up the next day on your way back. The bus will stop here as long as you make the request.

Price: There is an entry fee of 65RMB, or 25RMB for students with ID. This is payable at the ticket booths at either end of the trail.

Weather: The weather can be hot during the day and very cold at night. Remember to layer your clothing! The best time to hike the gorge is the middle of the year, around May and June. Check in with cafes and hostels before setting out on your journey. Ask what the hiking and weather conditions are expected to be. The photos you see above were taken in February.

Eating: If hiking north, stop at Jane’s Guesthouse in Qiaotou to stock up on water and snacks. You can stop at guesthouses along the way for reasonably-priced food.

Sleeping: There are a number of guesthouses along the way, most charging 40RMB/night for a shared room. There are showers and home-cooked food is available to order. The guesthouses are not heated, though they often provide heated blankets (but not always).

Getting Out: There are buses from the end of the normal hiking trail (Walnut Grove) to Shangri-La (Zhongdian) and back to Lijiang every day. Inquire at your hostel or guesthouse as times can vary or change. The more adventurous can continue hiking to Daju or Baishuitai.

For more information, check out this Tiger Leaping Gorge trekking guide from my friends at NOMADasaurus.