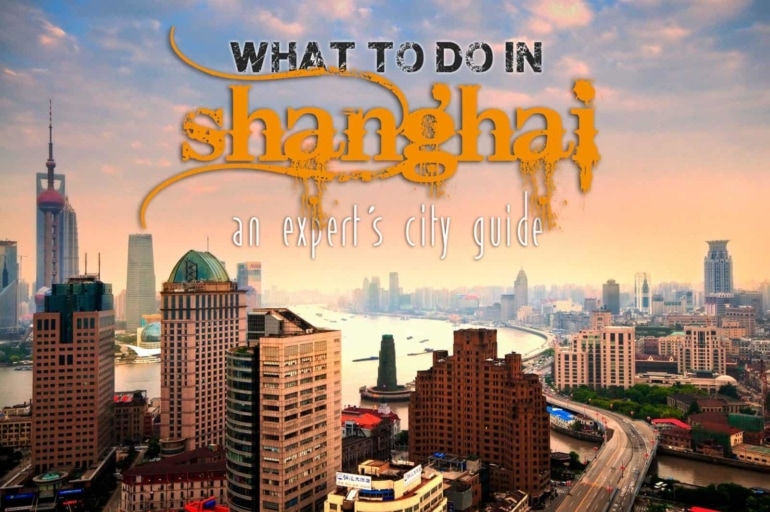 20 years ago Shanghai was nothing more than another fishing village in China. In a few short decades, Shanghai has undergone an incredible level of development, and has become a booming metropolis and a financial and commercial center for not only China, but all of Asia.

Thankfully, despite its fast paced development, Shanghai has retained a lot of its history.

Shanghai is one of the only places in the world where you can find luxury brand stores and towering skyscrapers co-existing perfectly with traditional Chinese laneway houses, street food, and random junk stalls.

Shanghai is also a great place to experience delicious cuisine from all corners of China and from many other places around the world!

The nightlife in Shanghai is comparable to none! Hundreds of bars, clubs, and lounges open their doors to expats, local Chinese, and visitors from around the world on a daily basis. It doesn’t matter what day of the week it is in Shanghai–this city is always an adventure for those looking for a memorable night out on the town!

But, best of all, Shanghai is still relatively cheap compared to many other metropolitan destinations around the world. It’s a city that even a backpacker on a budget can experience without breaking the bank.

⚠️ Due to the recent coronavirus outbreak in China, we at TravelFreak do not recommend traveling to China at this time. The U.S. Department of State has issued a statement warning against all travel to Hubei Province and restricting travel elsewhere in China. ⚠️

Best Things to Do in Shanghai

For a few more ideas on things to do in Shanghai and tips on how to make your trip there a success, check out this insider’s guide on Drink Tea Travel.

Best Places to Explore in Shanghai

Take a stroll around French Concession Area, near Changshu Lu Metro Station. You’ll be surprised by how different this part of the city looks from the rest of Shanghai. Don’t be afraid to venture down small alleyways and watch locals go about their daily life. Some of the best streets are Anfu Lu, Fuxing Lu, Julu Lu, and Donghu Lu. You’ll come across lots of fantastic cafes and restaurants to quench your thirst and grab a bite to eat!

Or why not spend your morning inside the alleyways of Tianzifang just off Taikang Lu? This artsy neighborhood, was once a typical Chinese residential area. It has retained much of its Old Shanghai charm, with an added boost of cafes, bars, galleries, restaurants and more. You’ll get lost in the maze-like alleyways and rub shoulders with expats, travelers and middle class Chinese.

Finish your day watching the sun go down from the Bund. Grab a camera and head for a stroll, or check out the Bund’s famous roof top patios for a stunning view of the Huangpu River and the financial district. Can you imagine that just 20 years ago none of these buildings even existed?

Where to Eat in Shanghai

In Shanghai your choices of food are endless. From tiny mom and pop hole-in-the-wall stalls to Michelin Star restaurants with world famous chefs – there is something here for everyone.

But no visit to Shanghai would be complete without trying one of Shanghai’s specialties – xiǎolóngbāo, a steamed bun, sometimes referred to as the “king of dumplings”. These dumplings are traditionally filled with pork, while other variations available include seafood and veggies. The best place to try xiǎolóngbāo is at Din Tai Fung, a Taiwanese restaurant chain that has gained international recognition for their xiǎolóngbāo. There are about 10 locations in Shanghai, with the most popular one located in Xintiandi.

For other delicious Chinese dishes to try in Shanghai, read about my favorite food in China. And if you are after something more interesting, why not try some authentic Chinese street food?

Can I interest you in a plate of chicken feet?

A Big Night Out in Shanghai

Unlike many other cities around the world, Shanghai doesn’t have one specific area known for great night life. In Shanghai, pockets of bars, clubs, and lounges exist all over the city. The best area for a great night out often depends on the time of the year, day of the week, and time of the night. The low cost of taxis makes it easy to bar hop across the entire city and, in fact, is exactly what hard-core partiers do in Shanghai.

To start off your night, head to one of these “quieter” areas for dinner and a drink

Later on in the night, move on to Yongfu Lu and Fuxing Lu. Check out El Coctel, The Apartment, or Boxing Cat Brewery.

Or, get dolled up and hit up the posh clubs on the Bund, like Bar Rouge or Vue Bar, or check out M1NT, tucked away on Fuzhou Lu, near Shandong Zhong Lu. Here, dress to impress and expect to pay an arm and a leg for a rum and coke. You’ll be surrounded by models (often hired by the club to elevate the appearance of their establishment), rich expats chucking thousands of Yuan on bottle service, and the cream of the crop of the Shanghai’s “it” crowd. Make sure you call ahead and make a reservation or you’ll be stuck at the door looking for a VIP to take you under their wing.

Just when you think the night is coming to an end, it’s time to hit up the after hour clubs. Choose your poison from: Hollywood, Shelter Basement, M2 or Muse and prepare to party until sunrise!

Keep in mind that most bars and clubs in Shanghai are targeted towards foreigners, so don’t be surprised to find yourself surrounded by foreigners throughout the night. If you want a sneak peek into authentically Chinese night life, check out Phebe Club on Hengshan Lu, near Gao’an Lu. It’s unique and over the top and it’s nothing like you have experienced before!

Best Places to Drink in Shanghai

There are literally hundreds of bars in Shanghai, ranging from cheap and cheerful establishments full of international students on a budget, to high end lounges offering unique cocktails and spectacular views.

Where to Stay in Shanghai

It’s best to stay as close to the middle of the city center as possible, giving you easy access to the rest of the city. You’ll find a lot of hotels in various price ranges along Nanjing West Lu, near Jing’an Temple, as well as a great hostel on Jiaozhou Lu just 15 min walk away.

The other area to consider is French Concession, in the southern part of the city. There are a few good hotels located within walking distance to metro and the famous Tianzifang area.

Best Places to Shop in Shanghai

Shanghai is a dangerous city for shopaholics out there! Hundreds of boutique shops line the streets of French Concession and giant shopping complexes rival the most intricate malls in North America. Shanghai’s Nanjing Lu, known as the #1 commercial street in China, is filled with storefronts for every luxury brand name you can think of!

But if you want a taste of something different, pay a visit to Nan Wai Tan Fabric Market on Lujiabang Lu, the largest fabric market in the city. Let your imagination and design skills guide you on your shopping adventure. Here the designers can custom make anything your heart desires, from wedding dresses and suits, to winter coats and every day clothing.

If you are looking for cheap souvenirs or great fake electronics and other branded goods, head straight to Han City Fashion and Accessories Plaza on Nanjing West Lu.

The public transportation system in Shanghai is very well developed and easy to understand (once you get the hang of it). There are 13 metro lines which will take you almost everywhere. The metro (map here) is really easy to navigate; there are English signs at every station and English announcements inside the train. Tickets can be purchased at electronic ticketing machines inside the metro stations and the instructions are available in English. Public transportation is really cheap and can be a great way to keep within your budget.

Taking a taxi in Shanghai is another great option! A trip across the city will only take you 15-20 mins and cost you no more than $10. If you are staying in city center, you should be able to get around on $3 USD per ride. Taking a taxi will save you the hassle of figuring out the metro system and helps you see more of Shanghai during your stay.

Just remember to ask your hostel/hotel staff to write the address in Chinese characters on a piece of paper for you, as Chinese taxi drivers do not speak any English. They will hardly ever understand you, even if you are trying your best to pronounce the name of the street!

Best Side Trips from Shanghai

If you have a day to spare in Shanghai, plan a visit to a small town called Zhujiajiao, an ancient water village located about an hour outside of Shanghai. You can easily get to Zhujiajiao by hopping on a bus. Departures from a bus station near People’s Square leave every 15-30 mins.

Zhujiajiao is one of the most well preserved water towns near Shanghai. Once there, take a stroll along the quiet streets, checking out temples, monasteries, cafes, and teahouses. For a different perspective, ride the gondola along the canals and see the town from above!

How to Get to Shanghai

Most visitors will arrive in Shanghai by plane, likely landing in Shanghai’s Pudong International Airport. If you are not in a rush and keen to experience a unique way of travel, jump on the Maglev train. This high-speed train (with a max speed of over 400km/hr) will get to a connecting Metro line in less than 8 minutes, allowing you to then travel by metro to your accommodation in Shanghai.

Alternatively, the fastest way to the city is by taxi. It will set you back $20 and take you about 45 mins to reach the city center.

Oksana Simakina
Oksana Simakina is the author behind Drink Tea & Travel, a cultural travel blog inspired by her love for tea and her passion for travel. She left her home in Canada in 2011 and has been traveling the world ever since. Over the last 3 years she has lived in London, Shanghai, and Brisbane and traveled to dozens more cities and countries, exploring each beyond the major sights and tourist attractions. To learn more about her travels, follow her on www.drinkteatravel.com.