Conquering the Highest Bungee Jump in the World. Because I’m an Idiot. 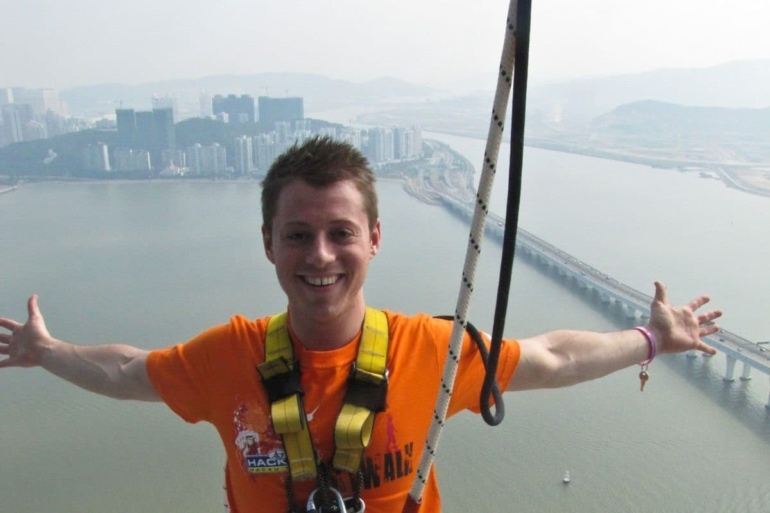 You wouldn’t be the first person to call me an idiot. After all, I do have a track record of doing some pretty stupid stuff.

During my junior year in college I jumped out of a second story window. One time I even got naked at a strip club (yeah, I know–it’s supposed to be the other way around). I even managed to get myself kicked out of both high school and college (but I still graduated…and with honors distinction!).

And these are only the stories I’m legally allowed to tell you about.

These days, my stupidity is a little bit more premeditated. The last time I found myself jumping from high places I ended up stark naked on the edge of a bridge.

This time, however, I was explicitly told that I would not be allowed to jump in the nude. Apparently, my reputation precedes me.

This is the highest bungee jump in the world, located in Macau, just outside of Hong Kong. The jumping platform rests at a staggering 764 feet, or 233 meters, on the top floor of the Macau Tower.

Because foreplay is important (or so I’ve been told), the staff at AJ Hackett put me on a ledge that wraps all the way around the top of the tower. For half an hour, I took on different shenanigans from the comfortable height of 764 feet in the air. My ledge buddies and I ran at full speed, entrusting that our harnesses wouldn’t snap as we flung ourselves in random directions.

We balanced on one foot, with the other foot hanging over the edge. This was actually the scariest thing I’ve ever done in my life. I don’t have a fear of heights or a fear of jumping. I have a fear of ledges. Somehow, I still managed to muster a smile.

We even decided to have a little rest, swing our feet over the edge, and sit down for a spell.

Next, I was due to jump. I swapped harnesses and stepped outside onto the ledge. I was excited for this one, and I wasn’t even nervous. I had done this before. In hindsight, I realize that I probably should have been.

With much deliberation, I finally convinced the guys running the show to let me jump backward. I told them this would be my fourth bungee jump and, eventually, they conceded. I had heard that jumping backward is the scariest way to do it (determination: true). When jumping head-first, you can see what’s going on below you. Jumping backward, you’re essentially entering a free-fall completely blind.

We counted backward from five and, without disinclination, I jumped.

I should have waffled. I could not have anticipated the horror that I would experience. All of a sudden, I was falling…very, very fast. And I had no idea where I was or which direction I was heading (well, down, obviously, but you know what I mean). I was completely disoriented and I had no frame of reference except the top of the tower which disappeared very, very quickly.

233 meters and a few minutes later, I was lowered safely onto the big cushioned mat that lay atop the cold, hard pavement. I’m convinced that anybody who does this has got to be at least a little bit insane.

Me, though? Well, I’m just an idiot. Ask my friends–they’ll tell you.

For more information on bungee jumping at Macau Tower, and to book, visit http://macau.ajhackett.com.

Many thanks to AJ Hackett who graciously provided me with a media pass and complimentary activities. All opinions, as always, are my own.