Ho Chi Minh City, Vietnam, is one of the most chaotic and contrasting places in the world. With a difficult past, yet bright hopes for the future, the people of Ho Chi Minh are some of the strongest and most humble I've ever encountered. 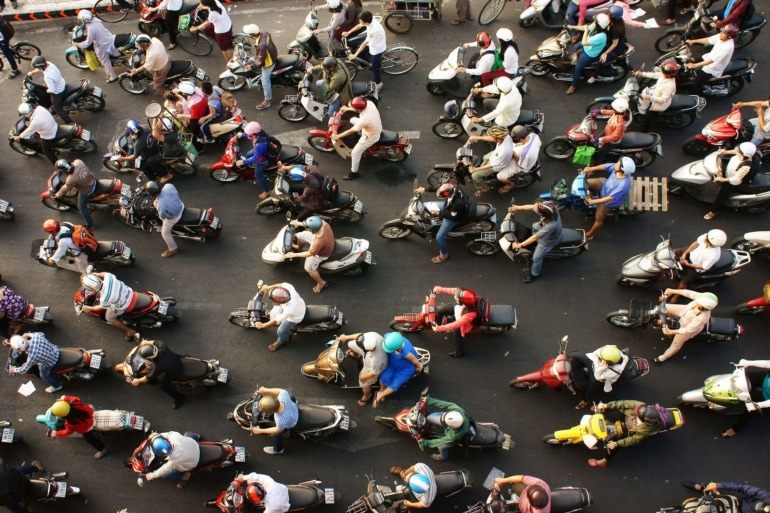 Incense drifts from the temples of Ho Chi Minh City, floating from ancient alleyways to glass-fronted skyscrapers. Minimalist designer stores juxtapose against vibrant street markets so tightly packed with people you can barely see your own feet. The city is filled with stark reminders of war, and though it’s the one thing I can’t shake from my mind, nobody says a word about it. The taxi drivers are all smiles and raised thumbs, and when I tell them I’m from America, the response is almost always an over-enthusiastic, “Obama! He very good!”

Few places in the world are as laced with contrast and contradiction as Ho Chi Minh. It’s as if a thousand chaotic worlds are colliding at once—you’ll leave Ho Chi Minh City with more questions than when you arrived. Of all the places I’ve been, Ho Chi Minh is one that I always recall.

Conflict brings change and this city is adapting. In some cities, every new incarnation brings destruction to what had come before. Ho Chi Minh, however, has cherrypicked the best of each era and preserved it for the next generation.

The city has become an amalgamation of history and modernity, spanning the time when it was known as Saigon, including all the international influences, from China to France, since the end of the war.

The Chinese quarter of Cholon, for example, is an evocation of the city’s complex trading history. Different ethnic groups had a foothold here, which are now epitomized by the mix of Buddhist temples, Taoist signs, 19th-century Catholic, and pagodas spilling their incense onto narrow streets.

Getting lost in the urban maze of Cholon is one of my favorite things to do in Ho Chi Minh. The labyrinth is so confusing it’s better to use a compass than a map to get around. The Binh Tay Market is a good starting point, from where you’ll walk past many temples and pagodas, including the bold colors of Phuoc An Hoi Quan Pagoda.

Conversely, the French started ruling much of Vietnam in the mid-19th-century, bringing with them elegant villas and Parisian sophistication. Among the finest colonial buildings are the Notre Dame Cathedral and Central Post Office, memoirs to an era of architectural decadence and artistic style.

There is also the majestic colonial building where the Fine Arts Museum is now housed. Here, centuries-old masterpieces are complemented by contemporary paintings documenting the tragedy of war.

Before the American War (as it’s known in Vietnam), there had been almost three decades of armed conflict in Saigon. First, the French ruled, then the Japanese, then the French again (but with U.S. support), and then independent South Vietnam.

Saigon, as it was known, was the main base for American troops who were in conflict with communist North Vietnam.

The city officially fell when the North Vietnamese troops crashed through the iron gates of the president’s home, thus giving birth to a new city known as Ho Chi Minh. Today, Reunification Palace is a tourist attraction that serves to remember the historical moment and to display the elaborate style of the city’s former rulers.

Though it only ended 40 years ago, Vietnam seems to have moved on from the war. It’s not surprising, though—an era of ugly war is not a time that anybody person, much less a country, would want to dwell on.

The War Remnants Museum in Ho Chi Minh is what’s left. It’s a sobering reminder of what happened between 1955 and 1975. And though many parts of the museum can sound like one-sided propaganda, so, too, is just about every Vietnam War movie ever made in the U.S.

But the museum only serves to enhance one’s respect and admiration for the people of Ho Chi Minh. The damage caused by Agent Orange (warning: graphic), for example, was devastating—with photos of deformed babies and mutilated human faces, it’s not pretty viewing, especially if you’re American. One can’t help but feel shame and guilt for what we did.

Such atrocities occurred just a generation ago, yet Americans and other foreign visitors are welcomed with open hearts and wide smiles. It would be easy for the people of Vietnam to shut themselves off from the rest of the world, and especially America, but they haven’t. And I’ve never felt like I was treated any differently because of where I came from.

The history is what originally drew me to Ho Chi Minh City. I wanted to experience a dreamy old-world image of Saigon, but this doesn’t exist without today’s modern iteration of Ho Chi Minh City. Ho Chi Minh has become one of Asia’s economic capitals, epitomized by the 262-meter Bitexco Financial Tower, where the Saigon Skydeck is located on the 48th of its 68 floors.

But if you head in the opposite direction of the skyscraper, down the Saigon River, you’ll notice that the culture beings to change.

There’s something celebratory about it all and the excitement continues long after dusk. The locals know how to party, whether it’s hard rock in a cafe hidden down an alleyway or a nightclub that’s open till dawn on the opposite side of the river.

It’s the blend of styles that make Ho Chi Minh such a unique place to visit. You’ll find politics and you’ll find history, but above all else, you’ll find a vision for the future.

Perhaps this mishmash of styles is best illustrated in District 1. This is where you’ll find rediscovered old-world alleyways alongside the city’s shimmering new buildings. It’s where you’ll see the contrasts of the city in such dazzling and unfathomable detail. Stay here and the fascinating paradox of past and present can be found with just a single step outside of your hotel.

Yet, even while there are old relics here, the city never dwells on the past. Yes, there are war museums and historical neighborhoods, but these only serve to memorialize the past, not to dwell on it.

While many Asian cities are dominated by soulless international chains, Ho Chi Minh City remains true to its history, and it’s proud of what it’s become. It’s a city that always makes me feel so welcome—a chaotic city of contrasts with a future shaped by, but not holding onto its past.