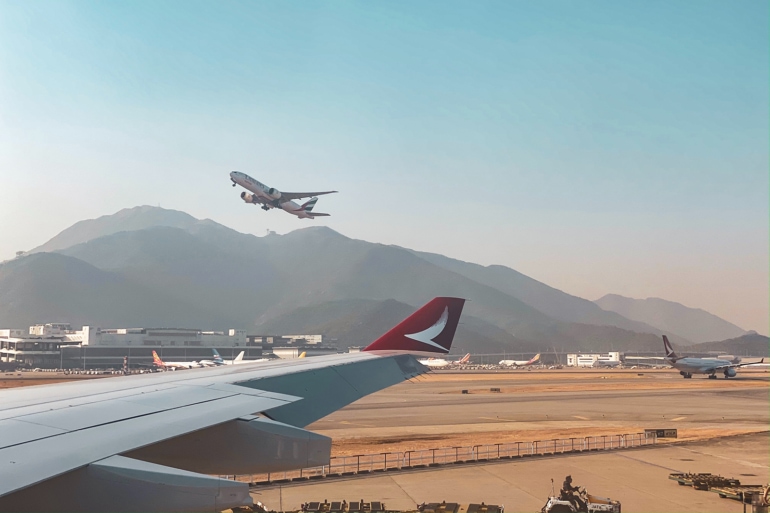 One of the most stressful experiences you can have when traveling is finding out that your flight is delayed or canceled. Being in these situations can throw you off your schedule and might cause you to spend more on rebooking flights, accommodations, and food.

Delayed and canceled flights are no longer new but do you know the reasons why these happen? Were you able to gain answers after asking yourself, “Why is my flight delayed or canceled?”

This article lists ten of the most common reasons why flights get canceled and delayed. We’ll also present tips on what you should do once there are changes with your flight schedules and what you can do to avoid them.

Table of Contents show
1. Extreme Weather Conditions
2. Bird Strikes
3. Strikes
4. Waiting for Connecting Passengers
5. Waiting for Crew Members
6. Complying with Flight Crew Rest Requirement
7. Waiting for Catering
8. Aircraft Cleaning and Preparation
9. Mechanical Issues
10. Security
What to Do When Your Flight Gets Delayed or Canceled
How to Avoid Flight Delays and Cancellations
Look at the Brighter Side

Although cited as one of the common reasons, flight delays and cancellations due to extreme weather conditions aren’t as common as you think. According to the Bureau of Transportation Statistics, 26.6% of flights in 2021 got delayed or canceled because of the weather.

Note that some flights can still depart even when the weather isn’t fair because most modern aircraft can withstand thunderstorms. In general, it takes extreme weather conditions, such as a blizzard, tornado, or hurricane, to cause flight delays and cancellations.

There are also instances when a flight gets delayed or canceled because of a collision between an airborne animal and an aircraft. These are known as “bird hits” or “bird strikes.”

Contrary to popular belief, bird strikes are common in aviation. On average, more than 13,000 bird strikes occur annually in the US alone. This usually happens as the aircraft takes off and lands.

Bird strikes cause flight delays and cancellations as security protocol requires the aircraft to conduct a specific set of procedures afterward. This can impact the on-time performance of the airlines, resulting in a “knock-off effect” or “rotational delay.”

Like other industries, airline staff can also go on strike to enter negotiations with their employer or leverage their labor power. The impact of these strikes can significantly affect the daily operations of the airlines.

One of the most controversial strikes recorded took place in September 2019 when the members of the British Airline Pilots’ Association walked out over a dispute about their pay. The strike lasted for 48 hours, affecting thousands of passengers.

Aircraft require an entire time to provide a safe and comfortable flight. In general, airlines need one flight attendant for every 50 passengers. Passengers can’t board the aircraft if this requirement isn’t met.

If the crew of the aircraft hadn’t arrived yet, expect flight delays and cancellations. This is a common occurrence in busy airports, such as London and Paris. Crews arriving from another destination with delayed or canceled flights will cause a ripple effect, affecting other flights.

Airline crews are requested to rest before every flight to ensure that they can function properly. Sometimes, they’ll max out their hours because of rotational delays (a connecting flight was delayed due to the late arrival of a previous flight) or scheduling difficulties.

Unless the airline can find replacements, there’s a good chance that the flight will be delayed to give the crews sufficient time to rest.

In aviation, catering includes food, utensils, service ware, and other miscellaneous items necessary for preparing and serving food on the flight. These are managed by a catering agent, which is also responsible for loading and unloading supplies, managing inventory, and driving catering trucks, among others.

Airline catering has a lot of moving parts and when things don’t go as planned, expect to experience delays or even cancellations. Usually, the bigger the aircraft is, the more time it needs to load and prepare for its catering.

Aircraft are expensive, which is why airlines exert a lot of time and effort on their maintenance. Once the aircraft arrives, crews will clean, refuel, and prepare it for the next flight. Other main activities in preparing the aircraft include:

The processes involved in preparing the aircraft can become the reason why it won’t take off on time. For example, if the aircraft isn’t cleaned quickly due to the lack of manpower on the ground, it could delay the boarding time.

Airplanes use state-of-the-art technology to fly and arrive at a specific destination, but this doesn’t mean that they’re immune to mechanical issues. Mechanical issues are one of the most common reasons flights get delayed or canceled.

Pilots run final checks before takeoff and signal the ground crew if they notice anything wrong. Depending on the gravity of the mechanical issue, repairing it can take a couple of minutes to several hours.

Common mechanical issues that occur before departure are:

Learning that your flight is delayed or canceled due to mechanical issues is frustrating but admit it, it’s better to have these problems diagnosed and fixed before you fly.

To ensure that their passengers are safe and secured throughout the entire flight, airlines implement several procedures, which can sometimes cause delays. For instance, the aircraft has to go through a special procedure to get clearance before it can take off from airports. This process is necessary before the aircraft is allowed to depart from all airports.

Any issues that occur during the process can cause delays. For example, if the crew suspects one of the passengers is a victim of human trafficking, the flight can get delayed as the airline will have to require documents from the passengers.

What to Do When Your Flight Gets Delayed or Canceled

Arriving at the airport and finding out that your flight is delayed or canceled doesn’t only cause stress — it can also impact your finances. This is especially true if you have to rebook a flight and pay for accommodation while waiting for your next flight.

Fortunately, some airports allow you to claim compensation whenever your flight is canceled or delayed. You’re legally entitled to receive compensation if the replacement flight delays your arrival for at least two hours and your flight was canceled less than 14 days before departure.

To claim compensation easily, research ahead to know the procedures you have to follow. For instance, if you want to claim TUI flight delay compensation, you need to prove that your flight was from the airlines and that it was delayed for at least two hours.

How to Avoid Flight Delays and Cancellations

As mentioned, there are many reasons why flights get delayed or canceled. It could happen due to extreme weather conditions, flights and crews not arriving on time, mechanical issues, and so on. Although these things are out of your control, there are certain hacks to minimize your chances of being in those situations.

Listed below are three practical tips to ensure that your next flight will not be delayed or canceled.

Since extreme weather conditions are one of the most common reasons flights get delayed or canceled, check the weather before booking a flight. Check weather updates online and offline to determine the weather forecast for the next few days or weeks.

Opt to reschedule your flight early if the weather reports suggest the presence of tornadoes and blizzards in your preferred destination. Choose to fly when the weather is fair, so you don’t have to encounter delayed or canceled flights.

Air traffic and busy airports can also cause flight delays and cancellations. When there are too many aircraft arriving and departing at a specific airport, your aircraft might have to stay in the air for longer periods, resulting in delays.

If possible, avoid flying during busy travel periods. Airports are busy during weekends and holidays, so book your flight on weekdays.

Aside from helping you find the cheapest flights, do you know that you can also use the internet to research the on-time performance of your flight? Visit the US Bureau of Transportation and check the history of flight delays and cancellations a specific airline has. This information will make it easier for you to come up with an informed decision on which airline to book a flight.

Look at the Brighter Side

Instead of sulking and letting delayed or canceled flights ruin your trip, claim the compensation you rightfully deserve. This will help keep your finances in order and ensure that you can still push through with your trip.