A Driving Tour of 8 Lesser-Known D.C. Monuments (and What They All Mean) 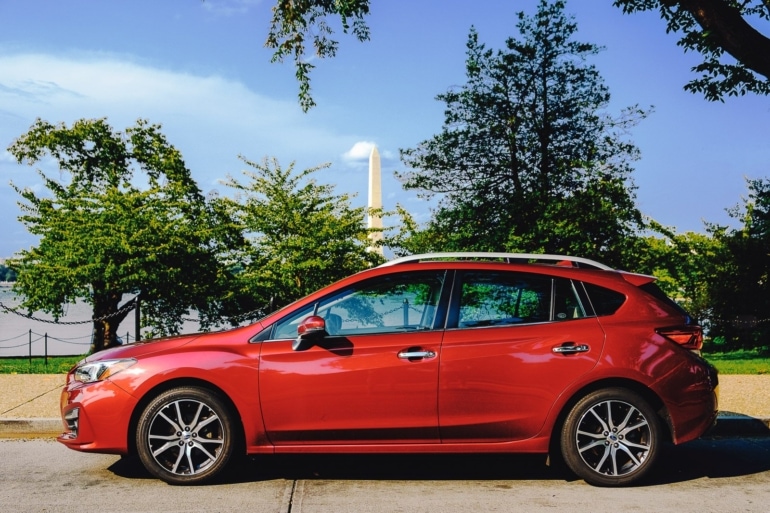 Have you ever taken photos of impressive statues, only to later realize you don’t know who they’re of—or why they’re there?

This is my relationship with far too many monuments in my current home, Washington D.C. Sure, I know the names—but what do they actually mean?

With a loaner of the 2017 Impreza from Subaru, I set out to fix this problem, starting and ending at the National Mall.

I wanted to go deeper than the usual sightseeing tours of Washington, though. This is what these monuments represent for young, traveling Americans like me—if only we took the time to find out.

A Word On Getting Around The National Mall

You may have heard the Mall is walkable—and yes, it absolutely is.

The entire National Mall covers 146 acres—and the distance from the Capitol Steps and the Lincoln Memorial is nearly 2 miles. A full circuit of the National Mall’s monuments is more than 3 miles, and you still haven’t seen the stuff outside the Mall, which is considerably further away.

If you’re not training to run a marathon and plan to visit D.C.’s monuments in a day like I did—or even over a weekend—you’ll need a pair of wheels, guaranteed. For a whirlwind tour, you need to be choosy—so I picked eight with stories behind them that really resonated with me.

Monuments Within The National Mall

More than 25 million people visit The National mall each year. That’s more than visit Yosemite, Yellowstone, and the Grand Canyon combined. The National Mall is a national park in downtown Washington, D.C., housing more than 50 monuments, memorials, and museums.

Erected in 1877, this white marble monument at the foot of Capitol Hill has a particularly haunting detail. At the very top, two robed women are embracing—Grief hides her face in History’s shoulder and weep—and below, facing the Capitol, a sprig of olive in her hand, stands Peace herself. The inscription reads:

[quote]In memory of the officers, seamen and marines of the United States Navy who fell in defense of the Union and liberty of their country, 1861-1865.[/quote]

Takeaway: The naval battles of the Civil War aren’t remembered in the same way that their land counterparts are, and this monument is a good reminder. But those two figures at the top stay with me—a reminder that every battle and every war come with the terrible toll of suffering that echoes for generations.

James A. Garfield was President for just 4 months, from March 4th, 1881, until an assassin’s bullet ended his life. You probably don’t know much more about him—most people don’t—but in terms of serving his country, his career was extraordinary in its diversity.

Takeaway: The three statues under this monument celebrate the three stages of his career: his time as an educator at Williams College (Williamstown, Massachusetts); his service as a major general in the Union Army during the Civil War; and his political career as a member of the House of Representatives from 1863 to 1880, before his tragically brief term as President. It’s a monument to a life of dedicated service, beginning to end, that shows you don’t have to stick to one path through life to make a big difference.

The obelisk of the Washington Monument is D.C.’s second most famous sight (behind the White House)—and up close it’s overwhelming. At 550 feet tall, it’s the largest obelisk in the world. Unfortunately, you can’t go in (due to elevator renovation it’s closed until 2019) but it’s enough to stand outside, look up, and let your jaw drop.

Takeaway: It’s a towering monument to a towering figure. The United States exists as a nation because of George Washington. In the words of one scholar: “He was the man who could have been a king but refused a crown and saved a republic.” Nothing more inspirational than that.

A short walk from the Lincoln Memorial, and the more famous Vietnam Veterans Monument, this simple memorial is a circle of stone carrying statues of three women tending to a wounded soldier. It was erected in 1993.

Takeaway: The majority of the 10,000 women who served in Vietnam were in the Army Nurse Corps. Many, like this former nurse, suffered from PTSD when they returned home, combined with the famously cool welcome Vietnam vets initially received. It’s a reminder that working as a nurse in a war zone requires a level of bravery and sacrifice few of us will ever truly understand, but all of us should respect.

The world’s favorite physicist lounges comfortably surrounded by papers—or rather, a 4-ton, 12-foot-high statue of him does, a short stroll from the Vietnam Veterans Memorial.

Takeaway: Einstein was an immigrant to the United States, and his comments on social justice are timely: “As long as I have any choice in the matter, I shall live only in a country where civil liberty, tolerance, and equality of all citizens before the law prevail.“

Monuments Outside The National Mall

The Mall gets almost all of the attention, but you’ll find dozens more monuments scattered around the city (with the most impressive clustered around the Pentagon, across the Potomac). This is where using a car turns from a convenience to a necessity.

It’s in the Southwest Waterfront area, it’s thirteen feet tall, and its arms are outstretched in a way instantly recognizable to the millions of people who saw James Cameron’s Titanic (I’m guessing that was the intention). Built in 1931, it was originally on the site where the John F. Kennedy Center now sits.

Takeaway: The inscription reads, “To the young and the old, the rich and the poor, the ignorant and the learned, all, who gave their lives nobly, to save women and children.” A message of selflessly helping others—but the occupants of the Titanic were also on the way to a new life in another country, scared as hell but filled with hope, and trusting that the rest of the world will help them live a better life.

That hits a nerve—because that’s why I started traveling in the first place.

Formed of three 200+ feet high stainless steel spires curling into the air like diverging contrails, the USAF Memorial is a stunning sight, especially when it catches the sun. It’s a bit of a drive out of the center of D.C., across the 14th St Bridge and down Route 395, where you’ll find it in the grounds of the Pentagon, with other monuments a short walk away.

Takeaway: This one is all about how it makes you feel when you see it. Squint, and you’ll see a person standing tall, throwing their arms wide and reaching to the sky as if there’s no ceiling and anything is possible—and that’s a nice vibe to take away with you.

Right in the middle of the capital city of the United States (or specifically, on the 2200 block of P Street NW in Dupont Circle) is a statue celebrating the poet laureate of Ukraine, and commemorating the fight to Ukrainian independence. It wasn’t an easy thing to put up in 1963—opposition was fierce—but today the statue of Shevchenko stands proudly, one of two monuments in D.C. dedicated to Ukraine.

Takeaways: An inscription on the statue reads, “WHEN WILL UKRAINE / HAVE ITS WASHINGTON / WITH FAIR AND JUST LAWS? / SOMEDAY WE WILL!”. An America that is open-minded enough to celebrate another country’s struggle for self-government in this way is a country I’m proud to be part of.

I saw everything in one day because I had the perfect car for the job.

The 2017 Subaru Impreza comes in two varieties: sedan and 5-door (better known as a hatchback). I chose the latter model – and it was a really stunning ride.

First, comfort. It’s not a big car (which is an asset when you’re working your way through traffic and back streets)—but the 2017 redesign is clever enough to pack in a lot of features without compromising how roomy it feels inside. It’s also super quick. When you need the power, it’s there in an instant!

Other thoughtful features for city drivers include an in-dash backup camera for parking, lights that blink when someone enters your blind-spot, and automatic braking if the car in front of you slows down dramatically and the sensors think it’s a prelude to an accident.

There’s a lot of hype around the safety of self-driving cars these days, but I think this approach is way better.

Fun fact: my mom drives a Subaru, and swears by its reliability and toughness. (Plus she lives in the mountains, so her Subaru’s 4WD comes in very handy.)

At first glance, it looks like an expensive set-up, but it’s surprisingly affordable. I shopped around and found leasing options for the 2017 Subaru at less than $200 a month! If you’re planning a big city-exploring trip, this car is tailored to the job, and it’s an absolute steal.

Which of these resonates with you most? Let us know in the comments below!

READ NEXT: Why Americans Were Born To Travel