How to Use a VPN for Travel

Not sure how to use a VPN for travel? We do! Here's everything you need to know about VPNs for both domestic and international travel. 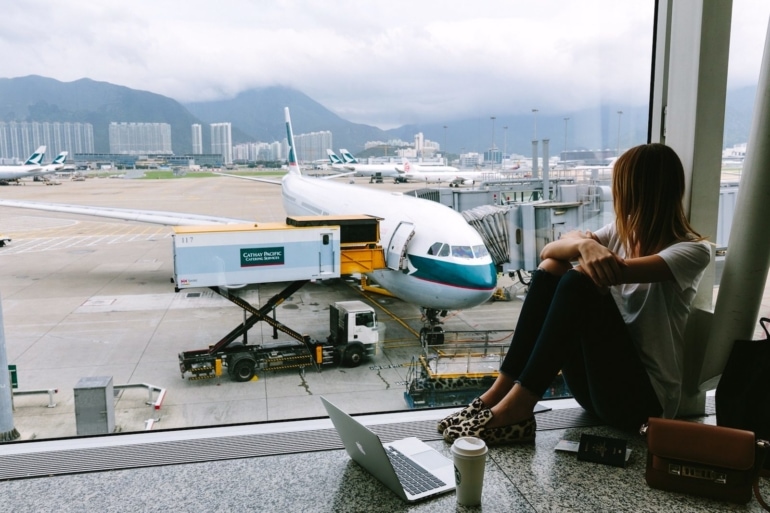 If you’re traveling and it’s your first time using a VPN, you might be a little confused by how it all works (or why you even need to use one to begin with). Whether you need a VPN for personal reasons or work reasons, VPN services can dramatically improve your online security.

Still confused? Don’t worry—I’ll break it all down for you, starting with the basics. Here’s how to use a VPN for travel.

Table of Contents show
1. What is a Virtual Private Network?
2. How do VPNs Work?
3. What to Look for in a VPN Service
4. Does a VPN Offer Complete Protection?
5. What is the Best VPN For Travel?

What is a Virtual Private Network?

A VPN (Virtual Private Network) is a service that allows you to hide your online activity to protect your information against hackers and other online threats. VPNs help to protect your IP address and personal data on any WiFi network, including public WiFi networks.

This is particularly useful for travelers, because using a VPN also means you can access blocked websites and other internet content by bypassing restrictions, like geo-targeted restrictions or government censorship.

For example, it’s not uncommon for English teachers in China to have a VPN app to access websites they normally access in their home country. With a VPN, they can access WhatsApp, Facebook, or other illegal/blocked sites. If you’re in a foreign country and need to make contact with loved ones back home, a VPN might be necessary in this case…as it is with China.

Or sometimes it’s as simple as having a VPN to unblock certain TV shows or movies on streaming services, like Amazon Prime Video. When you’re on the road and need one of those down days in bed binging season four of Yellowstone, you can enjoy whatever TV or media you like.

How do VPNs Work?

Exactly what does a VPN do? In the most basic terms, virtual private networks change visible IP addresses so that it looks like your internet connection is coming from a different location.

It’ll appear like you’re browsing the web from your VPN server location rather than your actual device.

Let’s pretend that you’re trying to watch a particular TV show on one of the popular streaming services, like Netflix…but you’re traveling in Canada, and the show is only available on Netflix in the United States.

When you use the VPN to connect to WiFi, you’ll establish a secure connection to one of the VPN servers, which encrypts and transfers your online data and lets you bypass those geographic restrictions.

This encrypted “tunnel” makes it so that all your data and personal information is well protected. This makes it hard for internet service providers to track your data or sell your info, or figure out your personal identity.

If you want to access sites that require your personal or financial information, using a reliable VPN will give you that extra level of security, even on free public WiFi.

This is especially useful if you’re trying to pay the bills or check your bank account status while on the road! If you’ve ever been mid-transit in a foreign place and have found yourself unable to use your credit card or debit card, you can safely log into your banking app (even on mobile devices) and transfer money where you need it.

Furthermore, VPN providers can even help you find better travel deals. Some websites and services use cookies to target your location and other user data to alter prices, especially when it comes to airline tickets.

You can use your VPN connection to toggle between countries as you search for flight fares, thus ensuring the best price possible.

What to Look for in a VPN Service

So how do you pick the best VPN provider out there? There are a few things to keep in mind—including that the best VPN isn’t necessarily a free VPN or even a cheap VPN.

In fact, free VPNs are often likely to slow down your connection speed. If fast internet speeds is necessary for your travels (especially as a digital nomad), you’ll have to choose your VPN wisely.

You should also consider the following:

Does a VPN Offer Complete Protection?

Although a VPN will disguise your IP address, like anything, it has limits on its security features.

If you’re Googling something while signed into your Google account, for example, that information can be tracked via the Google account itself.

In other words, if you’re openly putting your info out there on the web, you’re more likely to reveal yourself!

Be mindful of what you’re doing and what kind of info you’re sharing, and you’ll be just fine.

What is the Best VPN For Travel?

So what’s the best VPN for your big adventures? It really comes down to what you’re using it for.

If you’ll only use a VPN occasionally for things like checking your bank accounts or firing off messages on WhatsApp to family back home, you probably don’t need something with a ton of data.

But if you’re consistently browsing the internet or working in coffee shops via public WiFi, or if you live abroad and can’t access certain sites, you might want to subscribe to a better, more trusty VPN service.

It never hurts to have that extra layer of security, wherever you are in the world!