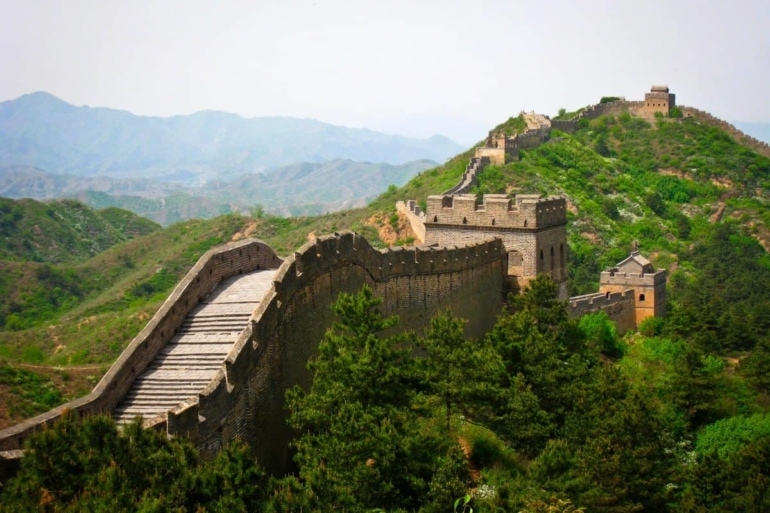 Stay away from your guidebooks, folks. If you’re researching The Great Wall of China in Beijing, they’ll tell you to go to Badaling or Mutianyu. I’m telling you, you’re going to want to visit Jinshanling.

After running into The CounterIntuitive in Hong Kong, who gave me the very same advice, I knew this was where I had to go. I spoke with a few other travelers as well and, despite what the guidebooks and the receptionist at my hostel told me, I went where my gut told me was the right place: Jinshanling.

The Great Wall stretches for 5,500 latitudinal miles (8,850km) across China. It has a history of more than 2,000 years and, over time, many parts have fallen to ruins or completely disappeared. Many bits are under reconstruction but, of course, the most charming sections are the ones that are entirely falling apart.

As with everything in China, getting places and doing things can be a little overwhelming. I was not in the mood to spend four hours commuting by bus and train, with limited Chinese speaking ability, to get to The Middle of Nowhere, China. Luckily, there are tour buses that will pick you up and drop you in the right place. For the pure convenience of it, it was worth the extra 20 bucks.

Stepping off the bus, our group was assaulted by hawkers. They didn’t come at us and immediately try to sell us anything. Instead, they became our self-appointed tour guides. There was one stipulation, of course: we were going to have to buy something from them later. The poor old lady trotted alongside me, every step of the way. Her stamina was actually remarkable!

One rather awkward nuclear scientist even whipped out his green belt and started doing karate on the wall.

Because, you know, that’s just what you do…

I remember my grandmother telling me about The Great Wall as a child. The way she described it, I was unable to fathom the sheer size of it. It remained a mystery to me and, even to this day, it still maintains a certain level of mystery. There’s something inscrutable about this place. The historical significance, its physical size and the magnitude of its reputation all lend themselves to a certain mysticism. The Wall snakes through the mountains of China, meandering through valleys and over hilltops. It’s hard to even imagine how long this goes on for.

My grandmother had a love for China. The wall in her bedroom adorned an authentic, silk emperor’s robe, something which will be passed along to me. Though we never visited China together, I feel as though she has indirectly passed along a certain worldly wisdom. She’s no longer with us, but I can somehow relate to her again, on an entirely new level. It’s like I’m following in her footsteps.

I just hope she didn’t go to nearly as many bars as I do.

I still find it hard to believe that I’m in China.

Of all places, China.

But I’ve stopped wondering why or how. It’s not worth it anymore!

Instead, I’m making the most of my days, and seeing just where this life of mine wants to take me.

And so far, it’s taken me to some pretty awesome places. No complaints on my end.

READ NEXT: Shangri-La is Real: in Southwestern China, on the Border of Tibet