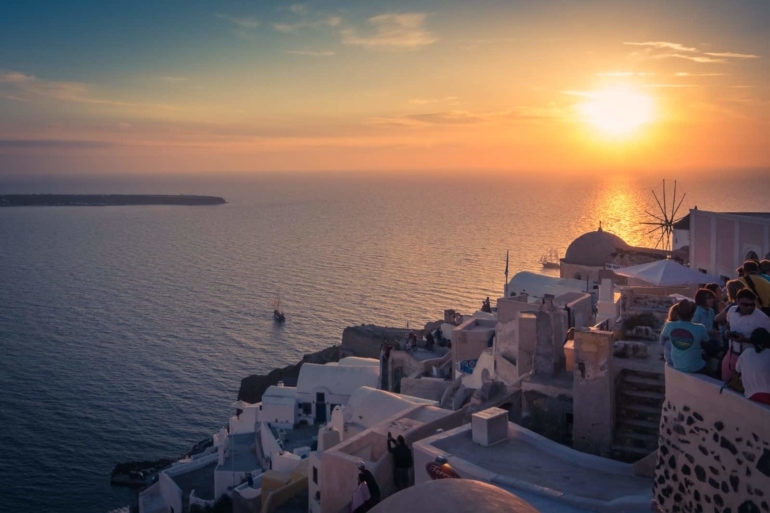 Greece is world-famous for countless reasons: the food (ahem: CHEESE!), islands, beaches, architecture, and ruins. The history of Greece is just one example of the resilience of both the people and the country itself, and despite recent negative media attention, I believe Greece will continue to thrive as it has done for thousands of years.

After one month of traveling there, these are my 20 favorite pictures of Greece.

The Acropolis is, perhaps, one of Athens’ most iconic structures. Well known for its history and architecture, Greece is full of ruins, many of which are still standing today. They serve as an important reminder of where this country came from. I recommend you take a free walking tour in Athens.

Few pools in the world could match this one. Located along the road to Akrotiri, this hotel will cost you a pretty penny, but the view has got to be worth every single one.

There’s nothing quite as quaint as dining in Greece. This table for two was found in the old city of Plaka on the island of Milos. In typical fashion, bright whites, blues, and greens pervaded in every direction.

Pro Tip: Visiting Milos? Don’t miss Bariello, one of my favorite restaurants on the whole island.

4. The Island of Syros

A classic view of the port town of Ermoupoli on the island of Syros.

The Acropolis is perched high atop a hill in Athens and provides, without doubt, one of the best views of the city (and maybe one of the best pictures of Greece!). Don’t get too close to the edge, though—the security guards are all over it!

Pro Tip: Take a free, private tour of Athens (and the Acropolis) with This is MY Athens.

The sunset on Santorini may be the most iconic of all pictures of Greece. Though crowded with tourists, the sunset was stunning, and is perfectly paired with a glass of red Greek wine.

Pro Tip: Get to the village of Oia early in the evening if you want a good seat for the sunset.

I only had two days in Mykonos, one of which was plagued by a colossal storm! No worries, though—the photos were magnificent! Taken on Paradise Beach.

Pro Tip: If you like clubbing and international DJs, be sure to check out Cavo Paradiso.

8. Four-Wheeling on the Island of Ios

One of the best things to do on the Greek island of Ios is rent a four-wheeler and go exploring! Of course, the rental companies tell you not to go off road, but rules were meant to be broken (also, it was totally worth it).

If there’s one thing the Greeks are famous for, it’s the cheese (and olives, to be fair). You’ll find cheese in just about every form, on just about any other type of food. This feta cheese was wrapped in filo, then friend, and topped with honey, sesame seeds, and raisins.

Greece was host to some of the best sunsets I’ve ever seen. After climbing up the mountains in Meteora in the late hours of the evening, I perched myself atop a huge boulder and watched the sun come down over the ancient monasteries that this town is so well-known for.

Fun Fact: These monasteries were built on top of tall rocks for security reasons—there is no way to access them other than by climbing the cliff’s wall, meaning untrained attacking forces would be essentially unable to reach them.

Arriving on the island of Paros, the first stop had to be the best view on the whole island. That view is, unquestionably, from Agios Antonios on Kefalos Hill. I think you can see why.

Pro Tip: If you’re visiting the island of Paros, Parosweb is your one-stop resource.

Athens is home to some of the best walking streets I know of. The neighborhood of Thisseio is chock full of shops, street dining, and charming cafes to relax in.

Pro Tip: Use Booking.com to find the best rates on hotels in Athens.

Seen on postcards and billboards around the world, this iconic view might be the most famous of all. I bet you didn’t know there was a bathroom hiding behind that door 😉

14. Sunset on the Island of Milos

The best sunset on the island of Milos takes place in the traditional Greek village of Plaka. There’s a church there, overlooking the coast, which is the perfect setting for two special somebodies and a bottle of wine.

15. Old City of Naousa on the Island of Paros

A typical view of a traditional Greek village found on almost every Greek island in existence. The typical color scheme of Greece, blue and white, comes from the painted walls of the villages which contrast against the deep blues of the sea and sky. Most notably, these colors can be found on the country’s flag.

Pro Tip: If you’re going to Paros, don’t miss dining at Taverna Kolibithres, serving some of the best traditional Greek food I’ve ever had.

16. Prayer Candles in a Monastery, Meteora

Religion runs deep in Greece, and the famous monasteries of Meteora are no exception. Seen here are two individuals lighting prayer candles inside the Holy Monastery of Great Meteoron.

17. Sunset on the Island of Ios

One of my favorite islands in the Cyclades, Ios also provided me with some of my favorite pictures of Greece. Climbing to the top of the old city, a church overlooks the whole island and has, without a doubt, the best sunset view on the island.

18. Moonscapes of Sarakiniko, Island of Milos

Sarakiniko might be one of the most unique landscapes I’ve ever come across. More reminiscent of something one might find on the moon, Sarakiniko is actually a beach (water not visible in this picture) made of eroded white rocks.

Once home to more than 20 monasteries, Meteora, Greece has one of the most important complexes of Greek Orthodox monasteries in the whole country. All built on top of towering sandstone pillars, only six remain today. This is the Monastery of the Holy Trinity overlooking the village of Kalabaka.

Ancient Olympia is the site of the first Olympic Games of the 8th century. Just outside the city center, Hotel Europa is not only the best hotel in the city, but they have stunning views from the restaurant (like this one) with some of the best Greek food I encountered in the whole country.

Looking for hotels in Greece? Check Booking.com for the best prices! 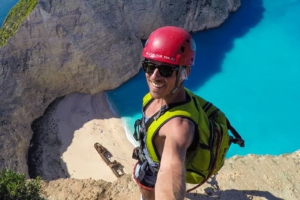