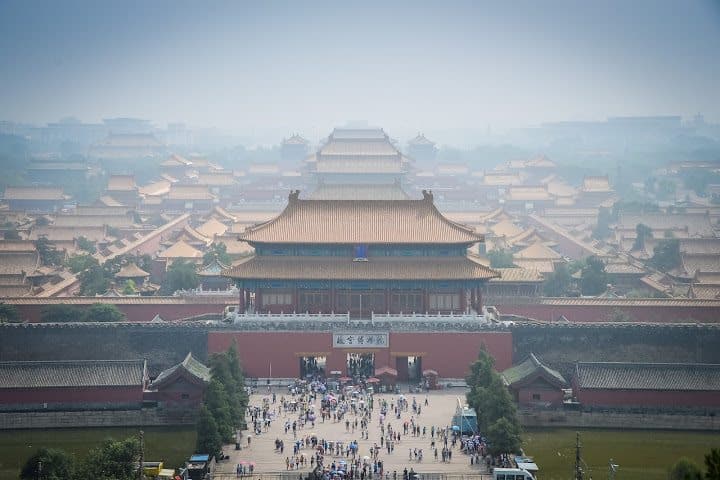 Ben Davis is an internationally published and award winning press photographer. Ben spent six years working for a busy daily newspaper in the UK before deciding to leave his post and take the train from London to Asia. He has spent the last five months traveling with his camera capturing everything from the Naadam festival in Mongolia to the world’s biggest fish market in Tokyo.

I caught up with Ben in China, where he has spent two months exploring this diverse and challenging country. Here, he has shared a dozen photographs of his travel highlights with us.

To see more of Ben’s trip check out his blog at bendavisphotography.blogspot.co.uk.

Chengdu is famous for its pandas, and most tourists visit the Chengdu Panda Base on the outskirts of town for feeding times in the morning, as the rest of the day these intriguing creatures just tend to sleep.

I went on a Monday morning to avoid the weekend crowds and enjoyed watching these iconic bears chomp their way through a small forest of bamboo, before passing out like the suffrage of a Sunday hangover.

One of the highlights of my trip in China was trekking the Tiger Leaping Gorge. The scenery was breathtaking, as were some of the climbs on the hike. The route took me through many different terrains, from rice terraces, farms, rocky cliffs and bamboo groves, all of it picture perfect.

This picture was taken just an hour or so into the two day hike and is looking back towards the village of Qiaotou at the start of the trail. The light was nice and the morning river mist hadn’t quite lifted, giving the valley a slightly enchanted feel.

The Great Wall of China, Beijing

The Great Wall is China’s landmark attraction. There are various sections of the wall you can visit, ranging from the fully restored and busy Badaling to the quiet and crumbling Jiankou. I headed to Mutianyu, which sits somewhere in the middle in terms of restoration and visitor numbers, and is about an hour’s bus ride from Beijing, the capital.

It was a glorious August day, and fortunately the crowds that typically swamp China’s tourist landmarks were nowhere to be found. At times I had entire sections of the wall almost to myself; walking along the ramparts was one of the highlights of my visit to Beijing, and was another tick on my bucket list.

Looking down from the 25th floor, Zhengzhou

China’s urban development is racing ahead at a speed unlike anywhere else. There are said to be more construction cranes in China than in the rest of the world combined. Modern mega cities of enormous tower blocks now largely replace traditional Chinese architecture, as rural populations move towards urban centres in search of work.

The Forbidden City is one of the biggest attractions in Beijing, both in terms of draw and actual size. It was built as both a fortress and a playground for the Emperors of the Ming and Qing dynasties, and served as the Royal home for almost 500 years. Today tourists get lost in the maze of courtyards and alleyways that weave between the 980 buildings located inside this medieval citadel.

Shanghai is China’s commercial capital. Its famously futuristic skyline makes a bold statement about China’s ambitions and economic power. I found Shanghai to be different to the rest of China: it’s much more international and feels more exuberant than the other mega-cities. Considering China is technically a communist country, Shanghai felt like a monument to money and modernity; everyone seemed to be chasing the Yuan and most of them seemed to be getting it.

I was lucky with the weather here, and although the evenings were rather chilly, the days were warm and bright. As a photographer I was treated to some wonderful light conditions, and as soon as I’d taken this I knew it needed to be in black and white to exhibit the contrast between sunlight and cloud shadow. It serves as my tribute to the American landscape photographer Ansel Adams.

It’s easy to get trapped in China’s enormous cities, and after a while, to me, they all begin to feel a little similar (in the same way that most high streets at home are often very much the same). I wanted to get out into the countryside to witness a more rural side to Chinese life.

I was cycling on my own through the fields and farms a few miles west of Yangshuo, when I came across these siblings threshing the rice harvest. I smiled, said ‘Ni hao’ and watched them work for a while, before shooting a few frames of them in action.

With over a billion mouths to feed, China has an enormous industrial agricultural output, but everywhere you go in China you will still encounter local people growing their own food. Here maize is drying in the sun on the outside of a farmstead, near Qiaotou in Yunnan Province.

China has its fair share of spectacular mountains. The limestone pinnacles of Wulingyuan are the inspiration for James Cameron’s Avatar. You can either hike or take a cable car and elevator up to the peaks to soak in the surrounding spectacular views, of which I opted for the latter.

I was lucky with the light on my first visit, as the following day was damp and misty and didn’t make for the best of pictures. There were hardly any other travelers in the park when I visited in October, and it was possible to follow now forgotten mountain paths to find some solitude among this spellbinding scenery.

Yangshuo is popular among backpackers; the small town is geared towards providing travelers with everything they need. There’s lots to do in this beautiful little town. I went down to the riverfront at dawn on my first morning to try and capture that early morning haze that sometimes hangs in the air. It seemed the rest of the town was sleeping, apart from myself and the occasional fisherman who would float by silently on a bamboo raft through the mist of the dawn.

I took a private cruise on a bamboo boat down the Li River in Yangshuo, and we stopped at the ancient village of Fuli. I met this fisherman resting on a wall by the docks with his pipe, and he was friendly enough to let me get my flash out and take a few pictures of him before shaking hands (note his thumb) and continuing on my journey.

China is not only about the places you can visit, but the people you can meet, and my trip is full of memories and encounters with a host of wonderful characters.