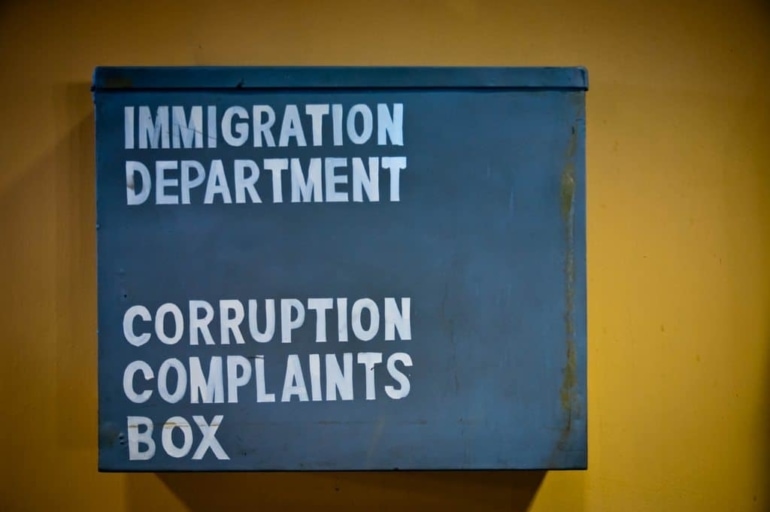 Every time I step into that line at customs, I get nervous.

There’s no particular reason, really. I just worry: What if I didn’t do all my research? What if my visa isn’t valid? What if I don’t have the right supporting evidence?

I’ve been very lucky on this front, and I’ve always had my bases covered. But there’s always the possibility of something going terribly, terribly wrong.

You know, as things tend to.

But crossing borders can be serious business, especially when you’re dealing with corrupt customs officers in a country that doesn’t speak your language, expired passports, menstrual supplies, or a very bad stomach.

Adam, from Travels of Adam, recounts his experience at the notoriously scammy Thai-Cambodia border crossing at Poipet. He booked a bus to take him across the border, but instead of taking him to the real border, the bus stopped at a fake one, where fake officials charge you for a visa that isn’t even valid!

When we reached the “border” at around noon, the driver had us get off the bus to fill out our immigration & visa forms. Of course, it turned out we were at one of those dodgy “travel agencies/consulates.”

I asked a simple question and the guy was instantly rude and off-putting. He didn’t like me questioning the visa fee in front of the other tourists. In fact, he had us separated across multiple tables so we couldn’t really exchange information about what we knew about the border.

One thing I heard repeatedly before crossing the border was that the Cambodian tourist visa only costs $20 and if anyone tries to tell you otherwise, you’re not at the border yet. That’s the best advice I can share.

So remember to do your research ahead of time and make sure you know how much your visa should be. Talk to other travelers, too, to get the inside scoop on travel conditions for your next destination.

Expiring Passports Will Prevent You Entry, Even If It’s One Day Too Old

Jade, from OurOyster, tried to get into Singapore, but customs found a small problem with her passport…

Travel Lesson: Many countries will not let you enter the country if your passport expires in 6 months or less from your entry or exit date.

Singapore is one of those countries. And Singapore loves to enforce their rules. My passport was expiring in 5 months and 30 days, and I had booked my flight to leave Singapore the very next day. That’s right – my passport was one day too old, and Singapore was not having it.

I was not allowed to enter the country.

Now, I would have been OK with having to leave Singapore for next time, but in this case, my flight home to New Zealand left from Singapore. So I learned the lesson of passport validity the cold, hard, cash way. I had to buy a new flight home.

Travel lessons don’t always amount to a bad day and a new story to tell. Sometimes, they can be very costly and, if you’re traveling on a budget, this type of thing could completely ruin your trip.

Learn to Label Your Tampons in the Local Language

Steph, from Twenty-Something Travel, was traveling within Bosnia when she had her bags ransacked by customs officials!

It’s kind of a weird quirk, but if you take the bus from Sarajevo to Mostar, Bosnia, you actually have to pass through a tiny strip of Croatia along the way. Even if you have no intention of getting off the bus you still have to go through customs.

Generally, on these bus crossings in Eastern Europe, a customs agent comes on board, collects everyone’s passports, then comes back and returns them stamped. Easy.

This time, though, on the border between Bosnia and Croatia (a country I wasn’t even trying to visit), the border guard handing back the passports stopped, looked twice at my passport and motioned for me to get off the bus, along with a handful of other twenty-something Canadians and Americans.

We were told to collect all our things and ushered into a tiny room where stoic border guards ransacked our bags. They pulled everything apart, looked in the crevices of books and in the pockets of our jeans.

The highlight was when this older male pulled out my bag of tampons. “what is this?” he asked me quizzically. I was totally stumped on how to explain menstrual supplies in Croatian or Bosnian!

After a thorough 30 minute search, they put our bags together and sent us back to the bus. I still don’t know what they were looking for, but I guess they didn’t find it!

Even Border Officials Are Not Exempt From Political Controversies

Jim, from Around the World in Eighty Years, found himself in a tense situation when he tried to cross between Egypt and Israel amidst a major conflict.

The Egyptian-Israeli border was the first “contentious” border I crossed in my life.  I was 22 years old.

Even at that young age, I was no dummy. I had read extensively about the Israeli-Arab conflict, met Edward Said, snuck into the Madrid peace talks on a fake journalist pass a Swede had gotten a hold of and had traveled extensively in Israel, the West Bank, and the Gaza Strip.

Still, I found the border intimidating and weird.  Even more bizarre was the completely different reality the Israelis and Egyptians lived in, both having widely different takes on the same historical events.

The man leaned down, coughed, cleared his throat with a rough scraping sound and spat a massive, grayish brown glob of phlegm right in the center of my passport. “Isra-eil people shit!” he shouted. That was Mohammed Abdel. He ran the drink and food stand on the Egyptian-Israeli border near Taba.

“But I’m not an Israeli! I pleaded softly and swallowed hard. “I didn’t do anything!” I was just me. Innocent. I just came here.

“You go Isra-el.” That was clear. It was the Israeli customs stamp from Ben Gurion Airport he had spat on. I had flown there from Istanbul. “That already something. Isra-el shit.” He dropped my passport in the dust and stomped on it several times then gave it a good kick. I stood in silence and watched. Was I supposed to be angry? Scared? Was this funny? Guido thought it was funny. Yes, Guido. A Swiss Guido.

Read the full story here, and always be prepared for the worst when you’re crossing contentious borders.

Kevin, from A.man.of.no.nation, had a rather hilarious, yet tiresome, experience traveling between Syria and Turkey. I wouldn’t even wish this upon my worst enemies!

An Iranian who I met via Couchsurfing in Ankara had to renew his Turkish visa and invited me to travel with him to Syria. As a U.S. citizen, I knew that I needed a Syrian visa in advance and Shahab already went through the bureaucratic process of obtaining his. I went with him on a whim without thinking twice about it; I left the very next morning without a visa.

After eating nothing but enormous quantities of çiğ köfte for hours on the bus, the spicy raw meat began treating my stomach like clothes in a washer machine. I arrived at the Syrian border without much of a welcome and spicy raw meat contributing negatively to my situation. I was an arrogant asshole of an American thinking I could show up without a visa.

The border police took my passport and left us waiting 16 hours without telling us what would happen next. The next 16 hours consisted of me teaching Shahab the most vulgar English I could think of and Shahab teaching me how to read and write Farsi. We had to find creative ways to clean up the exaggerated amounts of çiğ köfte that came out of me without toilet paper. And we unintentionally got into an argument with an Argentine traveler and Syrian border official as to why I was paying a lot less for a 15-day tourist visa than what the Argentine was paying for a transit visa.

Before we left for Syria, Shahab had said that he knew some Arabic which I clearly saw as a fib upon arrival.

After an entire day of not being able to return to Turkey, not being able to enter Syria and having no idea where my passport was, the border officials reluctantly gave me my visa and sent me on my way. After walking 500m into Syria, not a single soldier checked my passport.

So, to sum it up, the moral of the stories are simple: make sure you’re prepared and that you’ve done all your research. You don’t want to get caught backpacking Iran with an invalid passport, on a fake border between two politically tense countries, with too many tampons and not enough toilet paper.

Have you had an epic border blunder? Tell us about it in the comments below!

READ NEXT: Conquering the Highest Bungee Jump in the World. Because I’m an Idiot.