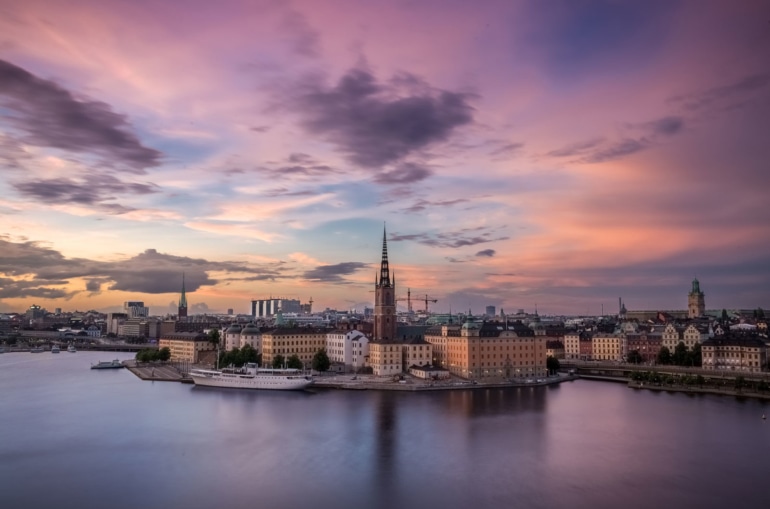 Looking to learn more about beautiful Sweden? You’ve come to the right place!

This Scandinavian country is known for its rich history, culture, innovations, and love of nature. Many people think Sweden is similar to its neighbor, Norway, and although the Nordic countries share a border and many similarities, they do have some key differences!

Whether or not you’ve visited this stunning region, you will learn a lot of interesting facts about Sweden below.

Sweden has the densest moose population in the world. If they all gathered together, they could form one of the country’s largest cities!

2. It was the first country to ban corporal punishment.

In 1979, Sweden was the first country to forbid hitting your children. Since this revolutionary ban, 35 other countries around the world have followed suit.

3. Music is one of the country’s biggest exports.

Sweden is known for its legendary bands of all genres. Internationally celebrated bands such as ABBA, Robyn, Lykke Li, Ace of Bass, and many more are of Swedish origin. Many songwriters and famous producers also come from Sweden.

4. It has the highest number of McDonald’s per capita in Europe.

Sweden is not a country known for struggling with poor health or obesity. However, that doesn’t mean there isn’t a shortage of fast food to enjoy. Sweden is the European country with the highest number of McDonald’s restaurants per capita!

5. Its recycling scheme is so successful that it imports waste from other countries.

Among Sweden’s admirable qualities, one is its successful recycling efforts. The country is so good at recycling that it actually imports and recycles garbage from outside countries, like Norway, and makes money from doing so.

6. One of Sweden’s Kings became a pirate after his crown was forcibly removed.

Many people have heard of the Swedish King Erik XIII, or “Erik of Pommern.” What people don’t know is that he was forced out of the crown in 1439. Erik then fled to Gotland, a Swedish island, and named himself the Pirate King of the Baltic Sea. He held that crown for 10 years.

7. Of all the European countries, Snus is only legally sold in Sweden.

Swedish snus is a moist, smokeless tobacco powder product that originated in Sweden in the 19th century as a variant of snuff, discovered in France. Snus doesn’t require spitting and can be placed in the upper lip for extended periods of time. Although it’s a popular tobacco product in Sweden, protected by the Swedish Food Act, it’s unavailable for purchase elsewhere in the European Union.

8. It is the European country with the highest number of patents per capita.

Sweden is the home of many successful inventors and innovations. Some famous inventions to come out of the country include Tetra Pak by Erik Wallenberg, the pacemaker by Rune Elmqvist, dynamite by Alfred Nobel, and the spherical ball bearing by Sven Wingquist. Sweden has the highest number of patents per capita in all of Europe.

In 1974, North Korea agreed to buy around 1,000 Volvo cars made in Sweden. The money promised to be paid by Kim II-Sung still hasn’t been received. Roughly 45 years later, Sweden’s government is still sending invoices requesting their 2.7 billion Swedish Krona from North Korea.

10. It is the fifth largest country in Europe by land area.

Sweden’s total land area measures 447,435 km2 m. Although it is large in land mass, per square kilometer, Sweden has the second lowest population in all of Europe.

11. The Swedish Passport is known as one of the world’s best.

The Swedish passport gives its holders entry without a visa into 124 countries. Upon arrival, Swedes can then gain a visa to 33 other countries.

12. Sweden has one of the highest Value-Added Taxes (VAT) in the world.

The standard Value-Added Tax in Sweden is 25%, making it one of the highest in the world. The only countries with a higher VAT are Bhutan, Hungary, Burma, and Djibouti.

13. It is the only country in the world where donations amount for more than 1% of the GDP.

Sweden is known to be a very giving country. Even though it isn’t anywhere near being the largest country in the world, it is the only country whose donations amount to more than 1% of the total GDP. Swedes are extremely proud of this generous fact.

Sweden is known for its lush forests, but most people don’t realize that it accounts for two-thirds of the country’s total land area at about 280,650 square kilometers.

15. Sweden is one of the only countries where land mass is growing, and not as a product of war.

Inland ice in Sweden was drawn 10,000 years ago. Since then, the land elevation has gone from 800 meters to 9.2mm. In southern parts of the country, land elevation is still lowering by small values of less than .5mm per year.

16. Sweden has many official languages.

Sweden is one of the only countries that gives its residents and visitors the ability to freely roam in nature. You don’t have to pay any fees to go camping or apply for any permission to travel through private land. The only exception is regarding land that belongs to a private home or land that’s being cultivated. When roaming freely, people are welcome to pick wild berries, mushrooms and flowers. The only rule is no littering!

As you’ve learned from the Sweden facts above, there are many unique qualities to this spacious, nature preserved country. Sweden is known for its generosity, charismatic leaders and innovators, as well as its lush natural landscape. We hope these facts about Sweden have inspired you to visit one day!